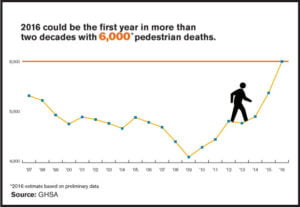 A new report released by the Governors Highway Safety Association found pedestrian fatalities have continued to rise in the past several years. and now account for the largest proportion of traffic fatalities recorded in the past 25 years. The increased use of smart phones by pedestrians and drivers along with other factors in distracted driving are possible culprits.

Researchers found the number of pedestrian fatalities have increased 25 percent from 2010 to 2015, while total traffic deaths have increased about six months. They looked at the first six months of 2016 and found a seven percent increase in pedestrian fatalities compared with 2015. After adjusting for underreporting in the preliminary data, researchers estimate the figure is actually closer to 11 percent increase. If that holds true, it would be the single largest increase in the 40 years that national records have been kept.

Data also showed that not all states had similar rates of pedestrian deaths. For example, Wyoming had one death in the first six months, while California had the most at 359 deaths. Additionally, only California, Florida, Georgia, Texas and New York combined accounted for 42 percent of all pedestrian deaths in that period.

Researches cited many possible factors as contributors to the rise in pedestrian fatalities. The rapidly growing use of smart phones to access wireless data while both walking and driving was noted as a newer factor contributing to more deaths. According to the Federal Highway Administration motor vehicle travel increased 3.3 percent in the first half of 2016 compared with the first half of 2015.

If you or your loved one has suffered serious injuries or you have lost a loved one in a fatal pedestrian accident, it is imperative to retain the most knowledgeable and experienced Portland personal injury attorneys available. Call our office today for your free, initial consultation.