The 10 Most Dangerous Stretches of Road in Oregon

In this post we go over the 10 most dangerous stretches of road in Oregon. According to the Oregon Department of Transportation, there were almost 31,000 car accidents in 2016 (the most recent data available). This was an 8.88% increase over the previous year. There were 446 fatality accidents (up 9.27% from 2015).

These statistics indicate that people are paying less attention when they are about to take off some time from work for vacation or weekend.

According to the Oregon Department of Transportation study, the following stretches of road are the most dangerous in Oregon over the past 3 years. Though interestingly, the roadways with the most car accidents in Oregon resulted in only 2 total fatalities from 2014 - 2016 (though 489 total injuries).

City: Beaverton
Average Daily Traffic: 19,500
Total car accidents: 90
Fatal car accidents: 0
Car accidents resulting in injury: 37
This is the most dangerous stretch of roadway in Oregon with 90 crashes over three years. Though none of them resulted in fatalities, there were 37 injuries. There are potential improvements proposed for the stretched that should improve safety. These are reliant upon financial availability for the county.

According to local residents, it’s normal to over-hear accidents as they happen along the roadway. It started as a rural farming community, but has become progressively more busy over the years. Now, roughly 19,500 cars make their ways through the interchange daily.

The Vista Ridge Tunnels are the busiest tunnels in Oregon. They carry roughly 30% more traffic than New York City’s Lincoln Tunnel. The stretch of road leading toward the tunnels presents several issues, making it the second most dangerous stretch of roadway in Oregon. US-26 has quick turns, a steep grade, and congestion as commuters travel toward downtown Portland.

Fender benders are a consistent issue on this particular stretch of road, adding to the congestion. The majority of the car accidents on this stretch of road are property damage only (98), and there were 0 fatality accidents. However, the area still experienced a substantial 187 accidents over three years.

The speed limit along this highway is 55 mph, but drivers regularly speed at a much higher rate. Nearly half of the 87 reported accidents resulted in injury (39). Frequent accidents on this stretch of road cause congestion to Oregon City. The city has requested funds from the state to improve the interchange.

This busy stretch of road features two lanes in either direction. It is a commercial stretch with auto repair shops, a mall and several restaurants. Over half of the 92 reported accidents resulted in injury (50) over the past three years. Though there were no fatalities.

The 217 interchange at SW Beaverton Hillsdale Highway has many of the same issues as Southwest Canyon Road. Impatient drivers don’t pay attention to local residents and run stop signs and lights. It’s estimated the 32,600 vehicles travel this stretch of the Beaverton roadway each day.

Very near the 82nd ave stretch of roadway (number 4 on our list), this commercial road in Portland suffered from 86 accidents over the past three years. More than half of these resulted in injuries. 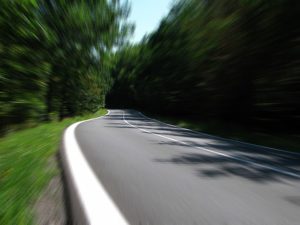 This is another busy Powell Blvd. intersection. There are gas stations and commercial buildings that add to the bustle. There are stop lights and turn lanes in all directions. However, there have still been 67 total accidents over the past three years.

This is the first stretch of road on the list to experience a fatality accident in the last three years. It’s a busy area in Northeast Portland that features parks, churches and residential areas. Well over half of the 71 accidents over three years resulted in injuries (40).

This is a busy four-way intersection with crosswalks, stop lights, a bike lane, and several commercial businesses. This is likely why there were 67 car accidents along this stretch of US-26 from 2014 - 2016. Almost three-quarters of those resulted in injury.

This is an exceptionally busy stretch of roadway, with an estimated 38,377 vehicles traveling through it every day. There were 100 vehicular accidents from 2014 - 2016 with one fatality and 54 injury accidents.

Also of note:
Highway 199 in Grants Pass Oregon doesn’t have the most car accidents in general, but it does rank number 13 in the 25 most dangerous highways in the country. As of 2017, there were 46 fatality accidents along the highway over the previous four years. The US ranking is based on fatality per mile of highway.